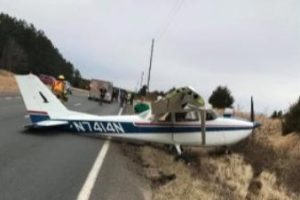 Light aircraft Cessna 172E Skyhawk with 3 people on board made a hard emergency landing on Route 3 in Culpeper County, Virginia. According to the preliminary investigation, the plane suffered engine failure after taking off from Warrenton Airport and the pilot was forced to land on the public road and then struck a utility pole. Fortunately, all the people on board, including the pilot and two passengers, were not seriously injured.

However, the aircraft suffered substantial damage.

Shortly after the crash at the scene of the accident arrived police officers, who closed the road and initiated investigation for the root cause of the crash.