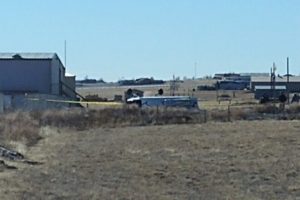 The light aircraft Cessna 172M Skyhawk crashed at the Meadow Lake Airport in east El Paso County, USA. The two-passenger aircraft leaving the airport did not reach the necessary speed for takeoff and collided with a fence. The aircraft came to a stop upside down next to a building. The pilot had non-life threatening injuries, while the other passenger was not injured. Fortunately there were no casualties during the incident.

The Federal Aviation Administration was responding to the incident. The local authorities initiated investigation for the root cause.

The aircraft was significantly damaged, but the crash was outside of the airport property and there was little impact to daily operations.

The Cessna 172 Skyhawk is an American four-seat, single-engine, high wing, fixed-wing aircraft made by the Cessna Aircraft Company. The aircraft has length of 8.28 m, height of 2.72 m, wingspan of 11.00 m and wing area of 16.2 sq m. Cessna 172 Skyhawk empty weight is 767 kg, while the gross weight is 1,111 kg. The aircraft is driven by 2-bladed metal, fixed pitch propeller and Lycoming IO-360-L2A four cylinder, horizontally opposed aircraft engine with power of 160 hp (120 kW).