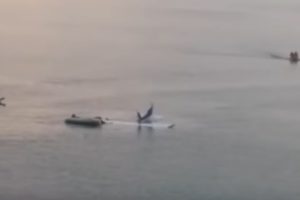 Light engine private aircraft Cessna-172R made rough landing on the water surface of Lake Baikal on June 16. During the accident on board of the airplane were a pilot and 3 passengers. All of them were injured, as two were with more serious hurts and were taken to a local village hospital. The aircraft was partially sunk in the water of Lake Baikal nearby.

“In the area of Olkhon island in Khuzhir, Olkhonsky district of the Irkutsk region made a hard landing on the water surface of lake Baikal light aircraft Cessna-172R owned by a private person”, local authorities released official statement.

The Cessna 172 Skyhawk is a four-seat, single-engine, high wing, fixed-wing aircraft made by the Cessna Aircraft Company. Measured by its longevity and popularity, the Cessna 172 is the most successful aircraft in history. Cessna delivered the first production model in 1956 and as of 2015, the company and its partners had built more than 43,000. The aircraft remains in production today.