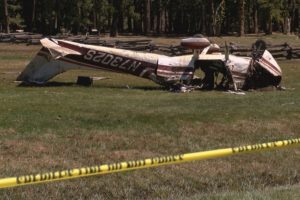 Aircraft Cessna 182P Skylane crashed in Tehama County after forced landing attempt due to a loss of engine power. The plane impacted open meadow terrain east of Mill Creek near Highway 36 in California. The airplane came to rest inverted, sustaining substantial damage. One of the three people on board died after the crash, while the remaining two were seriously injured. At the scene were sent emergency and rescue teams.

Highway 36 was closed shortly after the crash, but later the traffic was released again. The aircraft Cessna 182P Skylane was owned and operated by Air Carriage Inc in Chico.

The FAA will continue their investigation into the crash and we will update with any developing information.

Cessna 182 Skylane is an American four-seat, single-engined light airplane, built by Cessna of Wichita, Kansas. It has the option of adding two child seats, installed in the baggage area. Introduced in 1956, the 182 has been produced in a number of variants, including a version with retractable landing gear, and is the second most popular Cessna model, after the 172. Cessna 182 Skylane is four-seat light aircraft with fixed landing gear, powered by a 230 hp (172 kW) Continental O-470-R or O-470-S piston engine, gross weight 2,950 lb (1,338 kg) for take-off and 2,800 lb (1,270 kg) for landing.