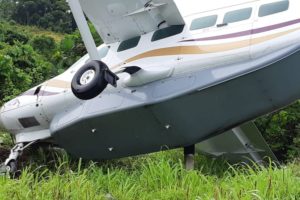 Alfa Trans Dirgantara aircraft Cessna 208 Caravan slipped at the end of the runway at Kasonaweja Airport, Mamberamo Raya Regency. The aircraft had 7 passengers and a pilot on board, arriving from Jayapura-Sentani Airport. Fortunately, there were no fatalities and no serious injuries during the aviation accident. Among the passengers, there was one child.

The Head of the Public Relations Office of the Papua Regional Police said that currently the condition of the aircraft was at the end of the runway and tilted to the right.

As a result of this incident, damage occurred to the right front fuselage, propellers and aircraft wings.

“There were no fatalities in the incident. All the passengers have been health checked and one person was in shock and is currently being treated at the Kasonaweja Health Center”, says the official statement of Papua Regional Police.

Previously the aircraft flew from Sentani Airport at 6:45 a.m. and arrived at around 8:15 a.m. at the local airport.

The pilot will be questioned at the Mamberamo Raya Police due to the incident. The investigation is underway.

The Cessna 208 Caravan is an American single-engined turboprop, fixed-tricycle landing gear, short-haul regional airliner, and utility aircraft that is built by Cessna. The airplane typically seats nine passengers with a single pilot, although with a FAR Part 23 waiver it can seat up to fourteen passengers. The aircraft is also used for cargo operations.