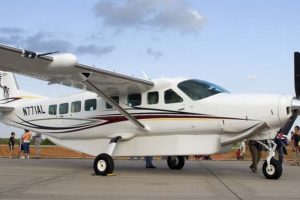 Tropic Air’s Cessna 208B Grand Caravan hit car during takeoff from Placencia Airport in Belize. The aircraft was taking off from Placencia Airstrip, when the left landing wheel made contact with a passing vehicle that had managed to bypass the barriers. Following the impact, the aircraft was not able to gain altitude and plunged into the Caribbean Sea. Fortunately all the 6 passengers and pilot were able to get out safely and were rescued without significant injuries.

On board of the Tropic Air’s Cessna 208B Grand Caravan at the time of the accident were Acting Prime Minister of Belize Patrick Faber and Agriculture Minister Godwin Hulse. Both were safe and without reported injuries.

The Belize Airports Authority had placed barriers and signage in place at the Placencia airstrip to prevent just such an occurrence. In the wake of what has happened, Tropic Air in coordination with the Belize Airport Authority and the Belize Department of Civil Aviation, are looking at how this vehicle passed in front of the departing aircraft, and what measures need to be implemented immediately to prevent another such occurrence.

At the scene there were police officers and firefighters, who ensured that all the people are in good health and there is no immediate danger for them and the population. An investigation is ongoing to determine who is responsible for the incident and what additional safety measures, if necessary, needs to be put in place.

Cessna 208 Caravan is an American single-engined turboprop, fixed-tricycle landing gear, short-haul regional airliner and utility aircraft that is built by Cessna. The airplane typically seats nine passengers with a single pilot, although with a FAR Part 23 waiver it can seat up to fourteen passengers.