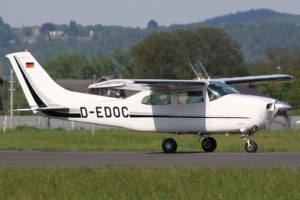 Aircraft Cessna 210 Centurion crashed in Costa Rica, causing the death of the pilot. The airplane was performing a flight from Mexico, according to local authorities trafficking drugs. The body of the pilot was found totally burned. the authorities found the wreck of the plane near Lomas de Sierpe after witness evidence for aircraft accident in the area.

The notice about the accident was reported by nearby residents. The initial report indicated that the aircraft landed at a private airport in Lomas de Sierpe. It remained approximately 20 minutes and then, in the takeoff maneuver, it fell to the ground.

Witnesses said the airplane flew between 600 and 800 meters and fell ashore. It fell in the channel of a banana crop. The blow generated an explosion and immediately there was a fire that covered an approximate radius of 50 m.

The fire reached great intensity, which makes presume to the authorities that the apparatus carried the fuel tanks completely full.

The local authorities reported that a GPS geolocation device was located at the site, apparently in good condition, as well as some navigation charts in which various places in Central American countries were indicated. Also, in different points of the site two firearms were found, which according to the initial report would be guns.

The investors found that aircraft came from Mexico and flew along the Pacific coast of Guatemala and El Salvador. Then, in Nicaragua, it crossed to the Caribbean to finally land in La Roxana.