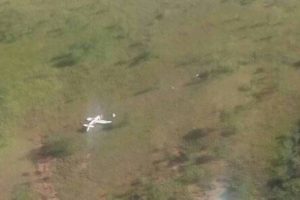 Aircraft Cessna 210M Centurion crash in Bolivar province in Venezuela, causing death of one and injuring of four people. The aviation accident was result of a technical malfunction on board of the light aircraft. Among the wounded occupants on board is also a 7-year-old boy and 18-year-old girl. All the injured people were transferred by helicopter to a medical center, where will be treated and hospitalized.

“The airplane YV2594 declared emergency and crashed in the sector La Yoguera in Bolivar province”, said national director of Civil Protection and Disaster Management, Jorge Galindo. “One person died and four were injured. The wounded were Luis Ortíz (50), Néstor Ramírez (37), Roselia García (18) and a 7-year-old boy. All were transferred by helicopter to a medical center”, added he.

The local authorities initiated investigation for the root cause of the plane crash. The circumstances are not well clear, but according to preliminary information the lose of height was caused by technical malfunction of the engine. The Civil Protection and Disaster Management also started checks about the airplane crash.