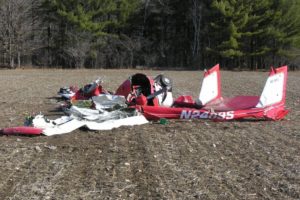 Light aircraft Cessna 337C Super Skymaster crashed in wooded terrain south of FM 968 on Waldrons Ferry Road in Harrison County south of Hallsville, Texas. According to the local sheriff’s office, the sole pilot on board died in the scene of the accident, but officials say that flight records for the plane, which took off from the Dallas area, indicate that as many as four people were onboard the aircraft.

The circumstances around the aviation accident are not clear. The airplane sustained substantial damage. The witness of the accident heard a loud “boom”. The crash was then reportedly discovered by hunters.

The Department of Public Safety and Federal Aviation Administration are on the scene. The investigation is underway.

Skymaster is a United States twin-engine civil utility aircraft built in a push-pull configuration. Its engines are mounted in the nose and rear of its pod-style fuselage. Twin booms extend aft of the wings to the vertical stabilizers, with the rear engine between them. The horizontal stabilizer is aft of the pusher propeller, mounted between and connecting the two booms.