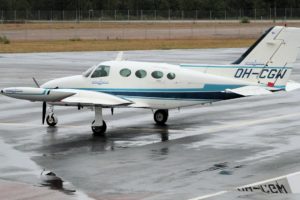 Aircraft Cessna 401B crashed in rural Williamsburg County near Greeleyville, causing the death of two people. The airplane clipped trees and impacted swampy wooded terrain in South Carolina, crashing on the ground and being engulfed by fire. The witnesses reported about the accident to the County Sheriff’s Office and at the scene were sent teams to identify the problem and try to help the people. Unfortunately after falling on the ground the aircraft was engulfed by fire and the rescue operation was impossible.

“It’s a very tragic event, our hearts and prayers go out to the families”, said WCSO Investigator, Alex Edwards. “It’s very overwhelming to see something like this. We’re very sad about this incident”, added he.

The bodies of the victims have been transported to the Medical University of South Carolina for an autopsy and identification.

The FAA will investigate and the National Transportation Safety Board (NTSB) will determine the probable cause of the accident.