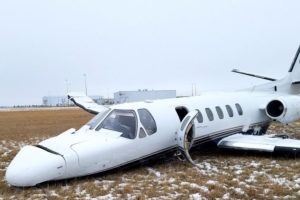 Aircraft Cessna 550 Citation II slides off Hector airport runway in North Dakota, USA. The airplane went off the right-hand side of runway 18 during landing and slid at soft ground suffering substantial damage. There were no reported injuries to the passengers and crew on board.

Several emergency crews responded to the scene of the accident, evacuating the people from the troubled aircraft. At least two fire trucks, a handful of police vehicles and an ambulance responded to the crash site. Fortunately, no serious injuries were reported and no fire on board. However, the aircraft is a total loss.

“Cessna Citation II was been in the process of landing on the airport’s primary runway when the small jet veered off the runway before coming to a stop”, said the executive director of Fargo’s Municipal Airport Authority, Shawn Dobberstein.

Federal authorities will arrive at the scene and will conduct an investigation for the root cause of the accident.