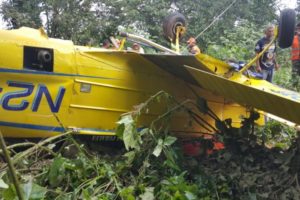 Light aircraft Cessna A188B clipped cables during an aerial application flight and crashed in a wooded area near La Recata de Bonao in the Dominican Republic. Following the accident the pilot got fatal injuries and died. At the scene arrived officers from Civil Defense and the Task Force Ciudad Tranquila, as well as paramedics, but unfortunately were unable to rescue the man.

The technicians from the Dominican Institute of Civil Aviation and the Board of Accidents and Incidents of Aviation arrived in the area to start an investigation process and determine the causes of the accident.

There were no injured people on the ground and no report about fire after the plane crash.