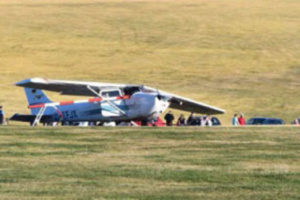 Three people died and eight were injured after aircraft Cessna F172N Skyhawk crashed at at Wasserkuppe Airfield near German city of Fulda. The aircraft crashed into a crowd of people at an airport, trying to regain height after an unsuccessful landing attempt. Emergency services were called to the scene shortly after 3.45pm.

Three passengers on board the plane were treated for light injuries and an eyewitness was treated for shock, according to Hesse’s public broadcaster, Hessischer Rundfunk.

Two adults and one child have died.

The wounded, including the pilot of the plane, were taken to a hospital.

The cause of the incident is under investigation. Preliminary reports suggest that the pilot attempted to go around after trying to land on runway 24. The aircraft continued past the end of the runway and crossed a road, hitting several bystanders.

The Cessna 172 Skyhawk is an American four-seat, single-engine, high wing, fixed-wing aircraft made by the Cessna Aircraft Company. First flown in 1955, more 172s have been built than any other aircraft. Measured by its longevity and popularity, the Cessna 172 is the most successful aircraft in history. Cessna delivered the first production model in 1956 and as of 2015, the company and its partners had built more than 44,000.