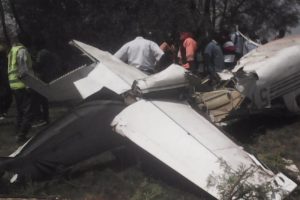 Light aircraft Cessna P206D Super Skylane crashed shortly after takeoff from Wilson Airport in Nairobi, Kenya. The airplane was carrying three journalists to a National Super Alliance (NASA) Rally in Baringo. The circumstances around the accident are unclear, but probably plane lost height due to technical failure.

The journalists sustained minor injuries while the pilots were badly hurt. All occupants on board of the light aircraft Cessna P206D Super Skylane were transported to local Nairobi West Hospital for medical treatment. They are reported in a stable condition without life-threatening injuries.

Police Airwing Commandant Rodgers Mbithi confirmed that the plane crashed close to the Southern Bypass, near Kibera. The local authorities initiated investigation for the root cause of the accident.

Cessna P206D Super Skylane is a family of single-engined, general aviation aircraft with fixed landing gear, used in commercial air service and also for personal use. The family was originally developed from the popular retractable-gear Cessna 210 and is produced by Cessna. The line’s combination of a powerful engine, rugged construction and a large cabin has made these aircraft popular bush planes. Cessna describes the 206 as the sport-utility vehicle of the air. These airplanes are also used for aerial photography, skydiving and other utility purposes. They can also be equipped with floats, amphibious floats and skis. Alternatively, they can be fitted with luxury appointments for use as a personal air transport.