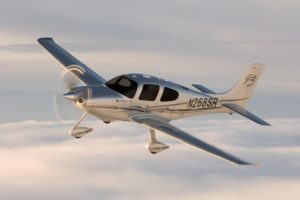 Light aircraft Cirrus SR20 crash in Pantanal area near Mato Grosso, Brazil. The aircraft left the Edwirges Farm in Rondonopolis en route to Santa Monica Farm in Barao Melgaco with two people on board – pilot and passenger, but crashed shortly after takeoff in uncertain circumstances. The 33-year-old pilot Mato Martins died, while the 57-year-old passenger Diogenes Toesca de Aquino, who is local businessman and the owner of the plane, is in critical condition and transported to local hospital.

The local authorities and aviation safety inspectors went at the area and started investigation for the root cause of the accident. According to witness evidences the plane crashed just 9 minutes after takeoff.

Cirrus SR20 is an American piston-engine, four-or-five-seat, composite monoplane built by Cirrus Aircraft of Duluth in Minnesota. The SR20 was the first production general aviation aircraft equipped with a parachute to lower the airplane safely to the ground after a loss of control, structural failure or mid-air collision. It was also the first manufactured light aircraft with all-composite construction and flat-panel avionics. The airplane has length of 7.92 m, wingspan of 11.68 m, height of 2.72 m. The empty weight of Cirrus SR20 is 964 kg and the gross weight is 1,383 kg. The plane is propelled by one Continental IO-360-ES six cylinder, horizontally-opposed piston aircraft engine with output power of 200 hp.