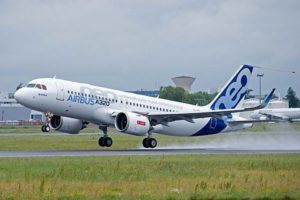 “We see stable demand for modern low-cost aircraft from both current and new customers. Today’s order is a good confirmation of this. Our order book will allow us to respond best to future demand”, said Peter Barrett, President of SMBC Aviation Capital.

“Re-ordering of SMBC Aviation Capital, which is one of the leading leasing companies in the world, confirms the strong position of the Airbus A320neo family in the aviation leasing market. In 2018, about 30% of all deliveries of Airbus aircraft accounted for leasing companies, which is equivalent to the number of aircraft delivered to customers from Europe and the USA”, said Christian Scherer, Commercial Director of Airbus.

Airplanes of the A320neo family are equipped with new-generation engines, Sharklets wing tips, and also have an optimized interior design, which will reduce fuel consumption per seat by 20% by 2020. Airbus A320neo family is the most commercially successful family of narrow-bodied aircraft in the world. Since the launch of the program in December 2010, over 6,500 orders have been received from over 100 customers, which represents about 60% of the sales market in this class.