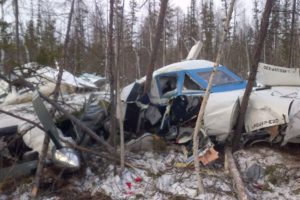 Khabarovsk Avia light-engine aircraft Let L-410UVP-E20 crashed at Nelkan Airport in Russia, causing death of six people and seriously injury to another one. The airplane with seven people on board was approaching for landing at Nelkan Airport, but on 2 km from the runway contacted a tree and crashed on the ground in forest territory. Immediately, the local fire department and an ambulance headed to the scene of the accident, but found only one young girl alive after the crash and was transported to the local hospital for treatment. All other six people were found dead.

A consolidated group with representatives of the administration and the police arrived at the scene of the accident to investigation the aviation crash. There was no fire detected after the accident. The root cause is under investigation.

The aircraft operated on a domestic flight from Khabarovsk to Nikolayevsk-na-Amure and Nelkan.

Let L-410 Turbolet is a twin-engine short-range transport aircraft, manufactured by the Czech aircraft manufacturer LET, often used as an airliner. The aircraft is capable of landing on short and unpaved runways and operating under extreme conditions. In 2016, 1,200 L-410 have been built and over 350 are in service in more than 50 countries.