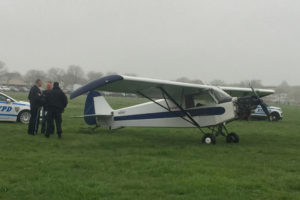 Light aircraft Piper PA-18-105 Super Cub made a forced emergency landing to the turf field terrain in Staten Island park in New York. The plane was carrying a Geico ad banner but was caught by rough weather and was not able to reach the airport, encountering strong tailwinds. Fortunately, the pilot safely landed his single-engine aircraft at Miller Field in New Dorp without causing damages or suffering injuries.

The field was being used for soccer practice when the aircraft came in from over the water. The pilot ultimately landed upright. Nobody else was aboard and no injuries were reported.

Piper PA-18 Super Cub is a two-seat, single-engine monoplane. Introduced in 1949 by Piper Aircraft, it was developed from the Piper PA-11 and traces its lineage back through the J-3 to the Taylor E-2 Cub of the 1930s. In close to 40 years of production, over 9,000 units were built. Super Cubs are commonly found in roles such as bush flying, banner towing and glider towing.