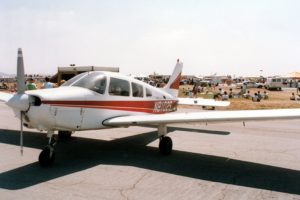 FlightSafety Academy light aircraft Piper PA-28-161 Warrior III impacted heavily wooded terrain in Indian River County, Florida. The airplane was performing a flight from Vero Beach Municipal Airport to Pahokee-Palm Beach County Glades Airport, but shortly after takeoff lost the attitude and crashed near Interstate 95. Following the crash, the sole pilot on board was fatally injured and the aircraft was destroyed.

It took hours for first responders to reach the heavily damaged plane, which was deep in the woods south of Vero Lake Estates.

“We did suffer a tragic loss at FlightSafety Academy this morning”, said Steve Phillips, the vice president of communications at FlightSafety International. “It was one of our students who was on a solo training flight. We have reached out to the family expressing our condolences. We told them, whatever they need, just let us know”, added he.

The circumstances around the aircraft accident were unclear. The investigation for the root cause is underway.