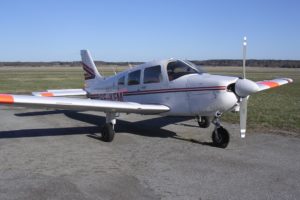 The aircraft Piper PA-28-181 Archer II experienced a runway overrun and subsequent impact with airport perimeter fencing during an aborted takeoff at Bowman Regional Airport in Louisville, Kentucky. The airplane came to rest on Pee Wee Reese Road, sustaining substantial damage. Firefighters and emergency teams arrived at the scene of the accident. Fortunately, neither the pilot nor the passenger was injured.

“It’s unclear if the Piper Archer plane ever left the ground during the takeoff attempt”, said Natalie Chaudoin, spokeswoman for the Louisville Regional Airport Authority.

Fencing around the airport was visibly damaged, as was at least one wing of the aircraft Piper PA-28-181 Archer II. Following the crash, aviation fuel leaked onto the ground, though the spill was quickly contained and there was no fire.

Piper PA-28-181 Archer II is two- or four-seat light aircraft built by Piper Aircraft and designed for flight training, air taxi and personal use. The PA-28 family of aircraft comprises all-metal, unpressurized, single-engined, piston-powered airplanes with low-mounted wings and tricycle landing gear. They have a single door on the copilot side, which is entered by stepping on the wing.