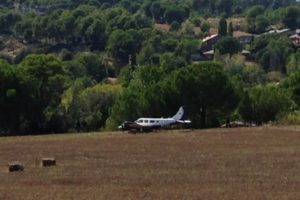 The pilot of the light aircraft Piper PA-34-200T Seneca II had to perform an emergency landing on a field shortly after takeoff from the Spanish Sabadell Airport in Sabadell, Catalonia. The airport was on a training flight with instructor and trainee, but engine broke during the flight, which pushed the pilot to emergency land on soft ground. The two people were no injured during the incident. The aircraft suffered only minor damages and will return in service after inspection.

The aircraft was piloted by the trainee and has landed in the field of Can Poncic, between Can Pallars Avenue and Font de la Riba Street, near Sant Quirze del Valles. During the emergency landing the aircraft passed under a high voltage line, but no personal injury or material damage has occurred.

The local authorities eployed rescuers at the scene to remove the aircraft from the field. The schedule is that this process will be extended for three days, as it will have to disassemble the wings before their transfer.

Piper PA-34 Seneca is an American twin-engined light aircraft, produced by Piper Aircraft since 1971 and that remains in production. The Seneca is primarily used for personal and business flying. Piper PA-34 Seneca II incorporated changes to the aircraft’s control surfaces, including enlarged and balanced ailerons, the addition of a rudder anti-servo tab, and a stabilator bobweight. The Seneca II also introduced optional “club seating” whereby the two center-row seats face rearwards and the two back seats face forward allowing more legroom in the passenger cabin. The gross weights are 4,570 lb (2,070 kg) for takeoff and 4,342 lb (1,969 kg) for landing, with all weight in excess of 4,000 lb (1,800 kg) required to be fuel.