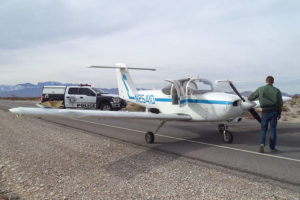 Light aircraft Piper PA-38-112 Tomahawk with two people on board landed by emergency on Kyle Canyon Road (State Route 157) in northwest Las Vegas, Nevada. The airplane was performing training flight, taking off from North Las Vegas Airport to practice ground maneuvers. Unfortunately, during flight, the aircraft lost engine power and the pilot instructor was forced to make a hard landing on the road. The emergency landing went smooth and the instructor pilot and a student were not injured.

The plane will be dissembled and taken back to NLV Airport. The investigation for the root cause of the accident is underway.

Kyle Canyon Road was closed in both directions for about two hours Sunday.

Piper PA-38-112 Tomahawk is a two-seat, fixed tricycle gear general aviation airplane, originally designed for flight training, touring and personal use. It is a single-engined low-wing cantilever monoplane with a T-tail and an enclosed cabin for two. It has a fixed tricycle landing gear and is powered by a Lycoming O-235 four-cylinder piston engine with a twin-bladed tractor propeller.