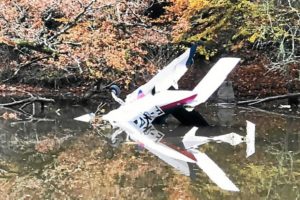 Aircraft Socata TB-20 Trinidad with two people on board crashed in Fremur lake in Cotes-d’Armor, France. The aircraft was performing flight from Laval-Entrammes Airport to Dinard-Pleurtuit Airport, but at the approach of the destination, the plane lost propulsion power and started falling down. The pilot lost control over the aircraft, which fell into the Fremur lake, located on 4 km short of Dinard-Pleurtuit Airport’s runway 35. One occupants is dead and one is missing. Divers have been called in reinforcement.

The local authorities initiated investigation for the root cause of the accident. The search and rescue operations is under way.

No more details are clear around the accident for now.