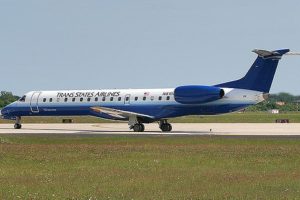 Aircraft Embraer ERJ-145 of Trans State Airlines received minor damage when it struck the both wing tips onto the runway surface during landing at Saint Louis airport in Missouri, USA. The airplane with 33 people on board was en route from Chicago O’Hare to Saint Louis, but during attempt to land at runway 30R had problems due to strong gusting cross winds, touching with wingtips the runway. The aircraft abandoned landing and passed near the traffic control tower for inspection of the wingtips. It was estimated that damages are minor and the aircraft was allowed for making another approach to runway 30L, where landed safely.

There were no injured people during the incident. The damages of the aircraft were minor, but Embraer ERJ-145 of Trans State Airlines remained on the ground for further repairs and safety inspection.

The local authorities and FAA initiated investigation for the root cause. According to preliminary information, the strong gusting cross winds caused problems during the first landing attempt.

The Embraer ERJ-145 is twin-engine regional jets produced by Embraer, a Brazilian aerospace company. The aircraft has capacity for 50 passengers. It is powered by two turbofan engines. The airplane features with straight wing with winglets, rear Fuselage-mounted engines and range of 2,500 km.

Newer PostRevenue of Aeroflot increased by 6.2% during the first nine months of the year
Older PostAir France-KLM and Jet Airways signed an expanded partnership agreement