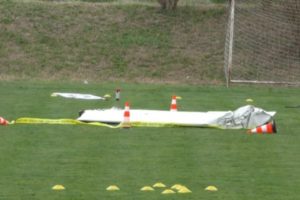 Light aircraft Zenair CH 601 Zodiac experienced an in-flight wing separation and subsequent impact with terrain near Orizari village in Bulgaria. The two people on board were fatally injured and died after the crash. The cause of the incident is damage to the wing. According to eyewitnesses, it broke up while the machine was in the air. Thus, the plane lost control and fell in Maritza River. The rescue team arrived at the scene, but just declared the death of the two people on board.

Local authorities initiated an investigation for the accident. A defective or old bolt is the possible cause of the wing separation during a flight. This is one of the main versions of the investigators for a technical malfunction of the machine.

Аlthough the bolts typically have the appearance of conventional fasteners, when they are used in aviation, they are set to have specific requirements. This means that they must have a certain strength, tensile strength, and bending, which are only approved by the aircraft manufacturer. The aviation uses specific alloys and often a bolt of a very conventional type, the price is tens or hundreds of times higher than that of the ordinary one.

Zodiac is a family of Canadian all-metal, two-seat, fixed landing gear airplanes that first flew in 1984. The aircraft have been produced as kits and completed aircraft by Zenair in Canada and Zenith Aircraft Company in the USA. The latest models in the Zodiac family are the ready-to-fly AMD Zodiac LS and LSi produced by Aircraft Manufacturing and Design. The design has a single-piece bubble canopy.