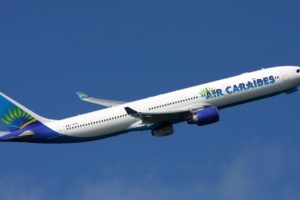 Delta, Southwest and American airlines announced there would be no change fees if a flight was impacted by Hurricane Maria. All three airlines are updating their websites with the latest details on their flights.

Hurricane Maria led to the closure of the airport of Guadeloupe. The facility will remain closed until Tuesday. Because of this, several Air France flights were canceled as well. They were supposed to arrive in the airport or fly away from there.

The hurricane in the Atlantic Ocean developed to Category 5, which is classified as extremely dangerous. Hurricane moves in the north-west direction at a speed of 16 km/h.

Earlier on Monday, the authorities of Martinique announced that the department declared the highest purple level of warning about adverse weather conditions. In this situation, residents of the island need to stay in homes and close windows and doors. Maria could hit Puerto Rico and the Virgin Islands Tuesday night and Wednesday.