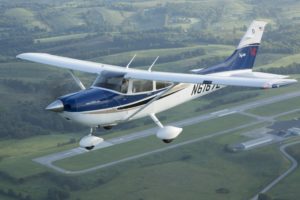 The airplane Cessna 182 Skylane crashed near Los Toldos in Argentina shortly after takeoff, after a technical malfunction. Following the accident the two occupants on board died in the crash, while another woman was seriously injured. A helicopter of the National Gendarmerie participated in the rescue operations, but they succeeded to recover only one of the people on board.

The investigation for the root cause of the accident is under way. According to the local authorities and witnesses the aircraft was flying with apparent mechanical damage.

Moments after takeoff, the aircraft started losing height and crashed in the hill near Los Toldos, between the Huaico Grande and Quebrada Cabra Corral. A plume of smoke was detected in the area.

Cessna 182 Skylane is an American four-seat, single-engined light airplane, built by Cessna of Wichita, Kansas. It has the option of adding two child seats, installed in the baggage area. The Cessna 182 is an all-metal (mostly aluminum alloy) aircraft, although some parts – such as engine cowling nosebowl and wingtips – are made of fiberglass or thermoplastic material.