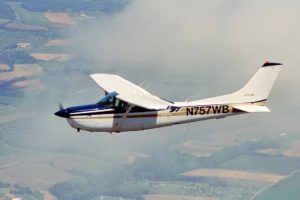 It remains unclear when exactly the plane took off, but local authorities are trying to assess what happened. Federal Aviation Administration and the National Transportation Safety Board initiated investigation for the root cause of the accident.

“We received a 911 call shortly before 8 am that a plane was down near the intersection of Center Avenue Northeast and 130th Street Northeast, an area southwest of town and about two and a half miles west of the Thief River Falls Regional Airport Emergency responders found the three men dead at the scene”, said the Pennington County Sheriff’s Office to local media.

Cessna 182 Skylane is an American four-seat, single-engined light airplane, built by Cessna of Wichita, Kansas. It has the option of adding two child seats, installed in the baggage area.