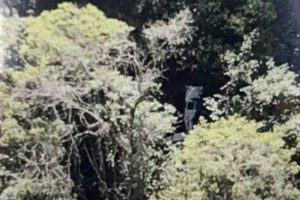 The airplane Cessna U206F Stationair, delivering food supplies in the region of Mahdia, disappeared near the Kaieteur Falls gorge in Guyana. The search and rescue operation has been launched over the Region Eight area. The communication with the plane Cessna U206F Stationair and its pilot was lost early this morning and authorities only became aware of the situation when an Emergency Locator Transmitter signal was picked up around 9 am. It was picked up and that was found to be about 3 miles north of Mahdia. The area was investigated from search helicopters, which caught the crashed plane among the trees in deep jungle of Region Eight.

“The Police and Military in the area were informed and a search effort is underway to locate the aircraft, based on the emergency locator transmission”, said Director General of the Civil Aviation Authority, Egbert Field. He was cautious not to refer to the incident as a crash, since efforts are still underway to determine what exactly may have occurred and to locate the aircraft.

It is unclear how many persons were on board the aircraft at the time of missing. It is also not clear what may have been the nature of the flight in the area. According to preliminary information, the pilot of the airplane Cessna U206F Stationair died during the accident and was the only casualty of the crash.

Cessna U206F Stationair is single-engined, general aviation aircraft with fixed landing gear, used in commercial air service and also for personal use. The line’s combination of a powerful engine, rugged construction and a large cabin has made these aircraft popular bush planes.