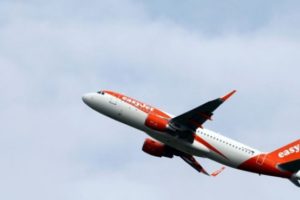 Airplane of easyJet emergency landed on Cologne Airport after a issuing a reported for terrorism threat during a flight from Ljubljana to London. Three passengers from the aircraft were detained at the airport after crew herd them talking about “terrorist issues”. The pilot decided to request an extra landing at the Cologne/Bonn airport, where the people were detained for further investigation.

There were 151 passengers on the plane, who were disembarked from the inflatable slides for emergency evacuation. They are accompanied by the police to the transit area for interrogation and screening.

The three suspicious passengers were handed over to the Cologne police and by the airport authorities. A backpack that was owned by one of the three was isolated and exploded controlled by sappers outside the plane.

Because of the incident, airport traffic was stopped between 19:00 and 22:00 local time. Ten flights are diverted to other airports, and 20 flights are delayed.

So far there is no information about the contents of the burglary, nor about the nature of the threat that led to the emergency landing.