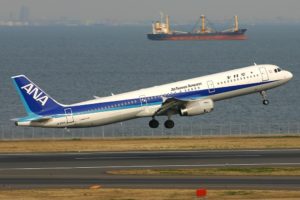 All Nippon Airways Airbus A321-272N suffered bird strike during takeoff from runway 05 on Tokyo Haneda Airport. The aircraft was performing flight ANA/NH791 to Oita with 85 people on board, but shortly after takeoff the collided with a bird, but the crew decided to keep the course to the airport of destination. All Nippon Airways’ flight ANA/NH791 landed safely at Oita airport without reports for injuries.

After landing the aircraft Airbus A321-272N was inspected. Minor damage of engine was found. The same aircraft was scheduled to operate the return flight, but it was cancelled due to the accident. This caused cancellation of the flight and another aircraft was arranged, causing a delay of about 4 hours and 40 minutes.