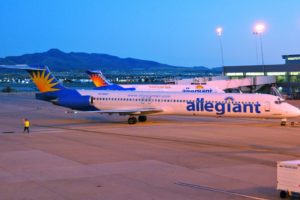 American low-cost airline Allegiant Air offered free flights for family members of victims of mass execution in Las Vegas. The airline, which is based in the city, told of the readiness to organize free transportation on its entire 150-point route network. In addition, Allegiant Air said that they are ready to change tickets to Las Vegas for travelers who decided to postpone their trips due to the accident, without any fees.

Earlier it was reported that the people from all over the world collected almost three million dollars donations to help the victims of the shooting in Las Vegas and their families.

On Sunday evening, a 64-year-old man, Steven Paddock, opened fire from the 32nd flood of Mandalay Bay hotel to the participants of a music festival. According to the latest information, 59 people were killed and 527 others were injured.

Allegiant Air is an American low-cost airline that operates scheduled and charter flights. It is wholly owned by Allegiant Travel Company, a publicly traded company with 3,700 employees and over 2.6 billion USD market capitalization. The corporate headquarters are in Summerlin, Nevada, a suburb of Las Vegas. Allegiant aims primarily to serve leisure travelers, particularly those in colder northern climates, going to warm-weather tourist destinations such as Punta Gorda, Tampa Bay, Las Vegas, Orlando, Los Angeles and Phoenix. It also serves smaller destinations that see few direct flights by major carriers. Many of the airline’s markets, such as Peoria, Illinois, are served only by commuter service requiring a connection at an airline hub.

Newer PostCirrus SR-22 with two people on board crashed at Klamath County in Oregon, USA
Older PostAir France plane Airbus A380 landed by emergency in Canada after engine explosion