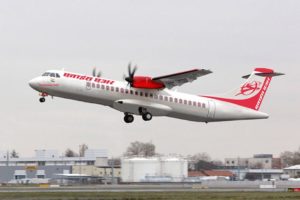 Regional aircraft ATR-72-212A operated by Alliance Air struck its tail onto the runway during landing at Diu Airport in India. The aircraft was performing a flight 9I-623 from Mumbai to Diu on behalf of Air India. There were no injuries during the accident, but the aircraft sustained substantial damage. All the passengers were disembarked at the terminal and the return flight of the aircraft was canceled.

The occurrence aircraft is still on the ground in Diu about 35 hours after landing.

The investigation of the accident is underway, but according to preliminary information, ATR-72-212A struck its tail onto the runway due to a human mistake during landing operations.

ATR 72 is a twin-engine turboprop, short-haul regional airliner developed and produced in France and Italy. The aircraft’s standard seating configuration is 72–78 passengers in a single-class arrangement. ATR-72-212A is fitted with either PW127F or PW127M engines. The improvements of the aircraft include higher maximum weights and superior performance, as well as greater automation of power management to ease pilot workload.