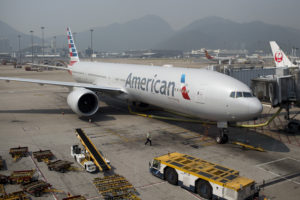 The Allied Pilots Association, which is the main pilots’ trade union, made a recommendation to its colleagues from American Airlines not to fly to Venezuela.

“Do not perform flights to Venezuela”, says the statement of Allied Pilots Association.

Two other leading US airlines, United Airlines and Delta Airlines, stopped flights to Venezuela as early as 2017.

The trade union made such a call following a warning issued by the State Department on Monday about the danger of visiting the Bolivarian Republic. The US Foreign Office justified this “high crime rate” in Venezuela, as well as “the possibility of arresting US citizens there”. On Tuesday, the administration of President Donald Trump recalled all remaining staff of the American Embassy in Caracas.

American Airlines is a major United States airline headquartered in Fort Worth, Texas, within the Dallas-Fort Worth metroplex. It is the world’s largest airline when measured by fleet size, revenue, scheduled passengers carried, scheduled passenger-kilometers flown, and a number of destinations served.