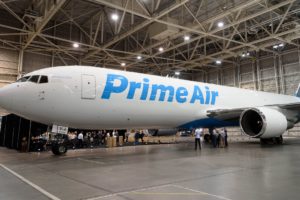 Amazon intends to aggressively develop its air cargo operations, through the acquisition of up to 40% of the shares of ATSG and Atlas Air – partners and actual air transport operators on the Amazon Air network.

According to the notifications filed last week with the US Securities and Exchange Commission (SEC), both operators also have agreements to expand the fleet of aircraft serving Amazon Air operations.

So, this year for the first time, the Amazon fleet will be replenished with Boeing 737-800 aircraft: the company has agreed to rent five narrow-body freighters from Atlas Air for a period of seven years with the possibility of further expanding the scope of the agreement by another 15 aircraft.

Boeing 737-800 aircraft have a payload capacity of 23.9 tons, compared with 58 tons for the Boeing 767. On this basis, some experts have suggested that Amazon may be planning to enter the European air transport market.

At the end of 2018, Amazon had agreed to expand its partnership with ATSG from 20 to 30 Boeing 767 transport aircraft. Delivery of five aircraft is scheduled for 2019, and another five – for 2020. Also, ATSG and Atlas are ready to transfer to Amazon 40% of their shares. The agreements reached at the beginning of their cooperation in 2016 provided for the purchase of up to 20% of the shares of each company.

Amazon Air, launched in 2016, delivers purchases made through the Amazon platform for the so-called “middle mile” – that is, to regional sorting centers in the United States. Currently, the Amazon Air network, which connects more than 20 airports in the country, serves 39 transport aircraft.

Amazon’s logistics infrastructure also includes a fleet of 10,000 trailers and a network of 185 logistics centers around the world.