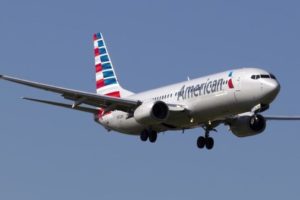 American Airlines Boeing 737-800 was hit by lighting during climbing out of Miami en route to Seattle. The crew abandoned climbing and decided to return to Miami for safe landing about 25 minutes later. There is no information about damages caused by the lighting strike, but the flight was canceled and all the passengers were rebooked to another flights.

The aircraft was received by emergency services, which started inspection. The airplane Boeing 737-800 remained on the ground for 18 hours after landing. The investigation is under way, trying to estimated the exact root cause and circumstances around the accident.

Usually after a lightning strike is reported, very specific and thorough inspections must be carried out by maintenance. This includes, among other things, inspecting the entire fuselage for burn marks/pitting/damaged fasteners. Once the inspection has been carried out, any defects found must be rectified by either carrying out a temp or permanent repair.

Fortunately during the lighting strike of the American Airlines Boeing 737 there were no reported injuries.