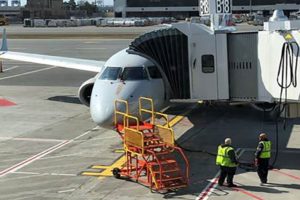 American Airlines Embraer ERJ-190AR hit a flock of geese after takeoff from Boston-Logan International Airport. The plane was performing flight AA2163, with 99 passengers and 4 crew en route to New York-La Guardia Airport, but shortly after takeoff suffered a bird strike. The engines were not affected, but the pilot followed the safety procedure and decided to return to Boston where landed safely a few minutes later. There were no reported injuries during the accident and no damages to the aircraft.

After landing the plane taxied to the terminal, where all the passengers were disembarked. They were boarded to a replacement aircraft and arrived in New York with a delay of two and a half hours.

There were no significant no damages to the aircraft, but it remained on the ground for further inspection and investigation.