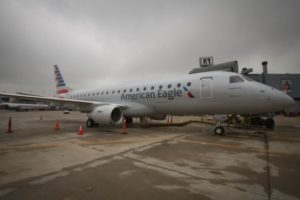 American Airlines plane Embraer ERJ-175LR, performing a domestic flight AA3930 from Greensboro/High Point-Piedmont Triad International Airport to Dallas/Fort Worth International Airport, suffered bird strike shortly after takeoff and was forced to abandon climbing off Greensboro, North Carolina. The plane departed at 07:30 hours local time and landed back at 07:54. Fortunately, there were no reported injuries among the passengers on board.

The passengers were disembarked and rebooked for other flights. The aircraft Embraer ERJ-175LR was taken out of service for repairs. The extent of damages received by the aircraft was not specified.

Embraer E-Jet family is a series of narrow-body short- to medium-range twin-engine jet airliners, carrying 66 to 124 passengers commercially. The E175 is a slightly stretched version of the E170 and first entered revenue service in July 2005. The E175 typically seats around 78 passengers in a typical single class configuration, 76 in a dual class configuration, and up to 88 in a high-density configuration. It is powered with General Electric CF34-8E engines of 14,200 pounds (62.28 kN) of thrust each.