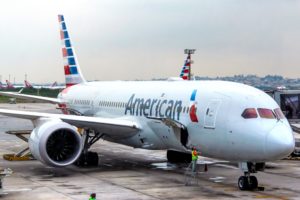 American Airlines received its first Airbus A321 neo. This is the press service of Airbus. In total, the airline acquired 100 Airbus A321 neo aircraft, equipped with CFM LEAP-1A engines.

The aircraft with the number MSN8647 arrived in Pittsburgh, where American experts will prepare it for commercial use.

Airbus A320neo family (neo for new engine option) is a development of the A320 family of narrow-body airliners produced by Airbus. The re-engined with CFM International LEAP-1A or Pratt & Whitney PW1000G engines and with large sharklets, it should be 15% more fuel efficient. Three variants are based on the previous A319, A320 and A321.

American Airlines is a major United States airline headquartered in Fort Worth, Texas, within the Dallas-Fort Worth metroplex. It is the world’s largest airline when measured by fleet size, revenue, scheduled passengers carried, scheduled passenger-kilometres flown, and the number of destinations served. American, together with its regional partners, operates an extensive international and domestic network with an average of nearly 6,700 flights per day to nearly 350 destinations in more than 50 countries. American Airlines is a founding member of Oneworld alliance, the third largest airline alliance in the world. American Airlines operates out of ten hubs, with Dallas/Fort Worth being its largest, handling 51.1 million passengers annually with an average of 140,000 passengers daily.