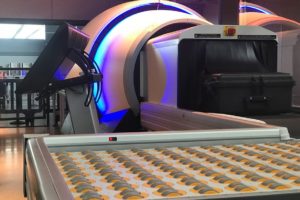 American Airlines tests a 3D scanner for baggage screening in Terminal 8 of the Airport John F. Kennedy in New York (JFK). The predecessor of this computer tomograph can be considered a 2D device, which is used at most checkpoints around the world.

The CT scanner, which shows 3D images, allowing to be rotated on 360 degrees. This allows you to view the contents of hand luggage from all sides. The new technology improves the quality of bag inspection by security personnel for the presence of explosives and other prohibited items. The airline claims that thanks to 3D scanners, passengers in the future will even be able to carry liquids, gels, aerosols and laptops in hand luggage.

“We think in perhaps five years or so, the passengers won’t have to take anything out of their carry-on bags”, said the Transportation Security Administration (TSA) administrator, David Pekoske. “What it’s capable of doing is detecting a wider range of explosives, which is very important, [as well as] a much lower weight of explosives. They’re just much better at detection, so you really get better security faster, essentially”, added he.

It is expected that modern equipment will be put into operation in JFK airport at the end of this month. It is also being tested in Phoenix, Arizona and Boston.