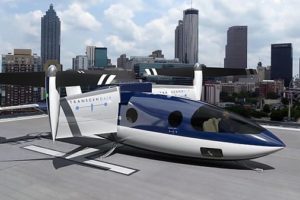 The American company Transcend Air has announced the creation of a vertical take-off passenger aircraft. The company believes that such aircraft will significantly reduce the load on airports and passengers waiting time, because they will not have to queue for the runway, which is often overloaded.

It is reported that the creation of a prototype of such an aircraft took six years. An aircraft with a vertical take-off can carry up to six passengers and, according to the plan, can serve as an air taxi, using not only airports for take-off and landing, but also already existing helicopter landing sites on the roofs of skyscrapers, in private territory and etc. The company is engaged in obtaining permits from the authorities, planning to launch its services by 2024.

Transcend Air claims that the use of such aircraft will allow to fly from New York to Boston in just 36 minutes, paying 280 USD for this.

Transcend Air is a group of experienced aerospace execs, engineers, and entrepreneurs who have designed a tiltwing VTOL aircraft which will grow to dominate the VIP transport helicopter segment by being faster, cheaper and safer, and which will enable a new city-center to city-center airline.