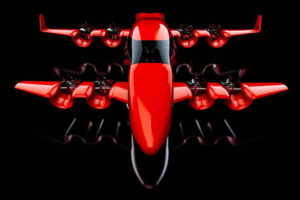 The American startup HopFlyt developed an electric longitudinal biplane airtaxi. The new aircraft will receive arched front and rear wings, between the arches of which will be installed electric motors for driving propellers on the suspension. The airtaxi can take off and land vertically. The arched wing, otherwise still sometimes called a semi-ring wing, is the wing of an airplane, which is curved by a half-ring. Inside this semi-ring there is an engine with an air screw. The first such design of the wing was proposed by American designer Willard Custer in the 1930s-1950s, when he introduced several experimental aircraft with an arched wing.

It is believed that the arch wing is able to create an additional lifting force, by accelerating the air flow over the wing with rotating screws. With this acceleration, a pressure difference arises over the wing and below it, which leads to the appearance of a lifting force. Caster asserted that, thanks to this feature, an airplane with an arched wing can take off almost vertically.

The arched wing of popularity among designers has not been received. In total, five experimental aircraft with such a wing were manufactured: CCW-1, CCW-2 and CCW-5 assembled Custer.

According to the HopFlyt, the arched wing will make the airtaxi relatively quiet. In addition, the wing of this design will need less energy in flight just by creating an additional lift. Currently, the startup is engaged in the production of carbon fiber elements of the future demonstrator of airtaxi technology with an arched wing.

The project involves the creation of a two-seat electric air taxi with a pilot and passenger landing side-by-side. The front and rear wings of the device will be rotated 68 degrees, allowing the aerotaxi to take off and land vertically. In each arch of the wing will be installed coaxial propellers, rotating in opposite directions. Each group of screws will be driven by its electric motor.

Other details about the prospective air taxi are still unknown. It is also unknown when exactly it is planned to begin flight tests of the demonstrator of airtaxi technologies.