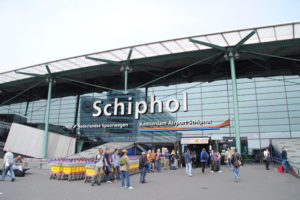 The Dutch Amsterdam Airport Schiphol partially suspended work due to unfavorable weather conditions, according to the official statement of the airport authority.

“On September 13, 2017, because of the stormy weather, the flight to or from Amsterdam Airport Schiphol may be postponed or canceled. Please check the information on your flight (on the website), in our application or contact your airline for the current information”, says the statement of the airport sent to the travelers.

The Royal Dutch Meteorological Institute has issued a warning for western coastal regions of the Netherlands of wind gusting up to 120 kilometers per hour (75 mph).

According to the information board of the airport, more than 200 flights were canceled, many were postponed. The vast majority on KLM, but with British Airways, Aer Lingus and Flybe also affected. KLM passengers who have yet to travel are being invited to postpone their journeys to a date up to and including Monday September 18. British Airways has cancelled at least a dozen flights to and from Heathrow because high winds have slowed the normal flow rate to Europe’s busiest airport.

While disrupted passengers do not qualify for cash compensation, their airline has a duty of care to provide meals and accommodation until they can be flown to their destinations.