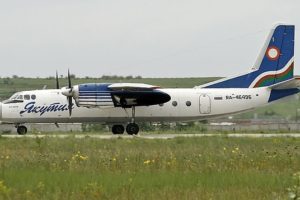 Airplane An-24 of Yakutia airline landed at the airport in Yakutsk with damaged pneumatics on the landing gear. The aircraft was en route from Lensk to Yakutsk with 28 passengers and 4 crew. The landing completed safely without damages of the aircraft and no injuries among the people. The aircraft will remain on ground until further investigation for the root cause of the accident.

“The aircraft was towed to a parking lot. There were 28 people and 4 crew members aboard the An-24 plane. There was no information about injuries, and a special commission has been working to establish the reasons for this”, says the statement of Yakutia airline.

The airplane was staying on the runway after the accident to assess its condition, but the operations of the airport in Yakutsk were not disturbed and no delays were reported.

The Antonov An-24 is a 44-seat twin turboprop transport/passenger aircraft designed in 1957 and manufactured in the Soviet Union by the Antonov Design Bureau. First flown in 1959, the An-24 was produced in some 1,000 units of various versions; 880 are still in service worldwide, mostly in the CIS and Africa, with a total of 297 Antonov An-24 aircraft in airline service, as of May 2010. As of 2014, 133 units were still in airline service.