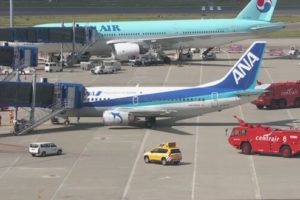 ANA’s Boeing 737-500 made an emergency landing at Nagoya Chubu Airport due to odor of burned cables. The aircraft took-off from the Nagoya Chubu Airport en route to Fukuoka, but during climbing at the cabin there was a strong smell of burning cables. The pilot diverted the plane and was allowed to return back to the airport. Several minutes later the ANA’s Boeing 737-500 landed safely without reported injuries among the 126 passengers.

The aircraft was waited by emergency services, but there was no fire on board. Five fire trucks went out to investigate the aircraft, but it was estimated that there was no immediate danger for the passengers and aircraft.

“ANA flight 435 from Chubu Airport to Fukuoka, Boeing 737-500 aircraft, took off at 9:16 am, but immediately after that there was a bad smell in the cockpit and rooms. The pilot and the flight attendant decided that there was a risk of fire and turned back to Chubu Airport, where landed 11 minutes after takeoff”, says the official statement of All Nippon Airways.

All the people were transferred back to the terminal and rebooked for replacement aircraft.

Boeing 737 is a short- to medium-range twinjet narrow-body airliner. The series is the best-selling commercial airliner in history. The Boeing 737 has been continuously manufactured by Boeing since 1967 with 9,659 aircraft delivered and 4,427 orders yet to be fulfilled as of August 2017.