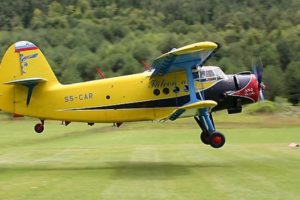 Antonov 2R biplane made emergency landing on 75 km from the city of Yeniseisk in the Krasnoyarsk region, Russia. The aircraft was carrying out air-chemical operations, but engine lost power during the flight and was forced to make hard emergency landing in the field. Following the accident there were no reported casualties, but the two people on board suffered injuries and were transported to local hospital. The accident was reported to local authorities and Krasnoyarsk investigation department on transport, who initiated investigation for the circumstances and root cause of the hard emergency landing.

The nature of the damage to the aircraft is currently being established. Presumably, the reason for accident could be the aircraft engine failure, according to the prosecutors.

The verification activities are carried out aimed at establishing all the circumstances of the incident. The audit will be made a procedural decision. A lot of work is needed to find out the causes of the accident and observe the rules of air traffic in the Russian Federation.

Antonov An-2 is a Soviet mass-produced single-engine biplane utility/agricultural aircraft designed and manufactured by the Antonov Design Bureau beginning in 1946. Its remarkable durability, high lifting power, and ability to take off and land from poor runways have given it a long service life. The An-2 was produced up to 2001 and remains in service with military and civilian operators around the world.