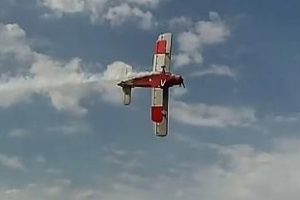 Airplane Antonov An-2T crashed during demonstration performances at an air show in Balashikha at Chornoye Airport near Moscow, Russia. The exhibition was in honor of 70 years since the first flight of An-2. During one of the speeches, the pilot lost control and at low altitude the aircraft hit the ground with the wing, after which the aircraft fell and caught fire. Both pilots on board of the aircraft died at the accident.

The aircraft with the onboard number RA-35171 had coming out of a loop and was turning onto runway heading. Altitude was lost during a sharp left hand turn.

The two casualties were pilots Dmitry Sukhorev and Boris Tilevich. There is no destruction or destruction on earth. Operational services are in place. All flights at the airport were stopped.

The main version of the An-2 crash is the crew’s error in the performance of the aerobatics figure.


The Antonov An-2 is a Soviet mass-produced single-engine biplane utility/agricultural aircraft designed and manufactured by the Antonov Design Bureau beginning in 1946. Its remarkable durability, high lifting power, and ability to take off and land from poor runways have given it a long service life. The An-2 was produced up to 2001 and remains in service with military and civilian operators around the world.tents