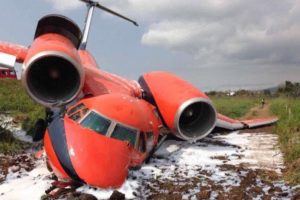 Cavok Air cargo aircraft Antonov AN 74TK-100 overran runway after bird strike at takeoff in Sao Tome Island Airport. The airplane with 6 people on board suffered runway excursion and significat damages after the incident. During the acceleration at the runway the right hand engine (D36) ingested a number of birds prompting the crew to reject takeoff, but unfortunately the brakes did not allowed to stop fast enough. The aircraft overran the runway and went down a slope before coming to a stop on soft ground. Five of the crew received some injuries, but without reported life-threatening hurts or casualties.

The aircraft Antonov AN-74TK-100 suffered substantial damage. An accident investigation commission has been formed and the circumstances around the collision are under way.

The officials released that the forward fuselage broke just in front of the wings. The thrust reverser on the no.1 engine was stowed and on the reverser of no.2 engine was deployed, which caused the slow reduction of speed and resulted in more serious accident.

The destination of the flight is not revealed by local authorities. The exact cause of the runway excursion is under investigation.

Antonov An-74 is a Soviet/Ukrainian transport aircraft, developed by Antonov. The unusual design feature of the An-74 is the use of the Coandă effect to improve STOL performance, utilizing engine exhaust gases blown over the wing’s upper surface to boost lift. The powerplant used is the Lotarev D-36 turbofan engine. The aircraft has length of 28.07 m, wingspan of 31.89 m and wing area of 98.62 sq m.