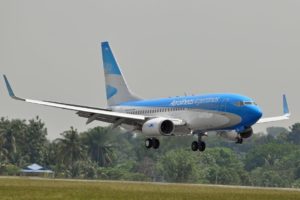 Argentine state airline Aerolineas Argentinas and its subsidiary Austral Lineas Aereas canceled all scheduled domestic and international flights on Tuesday due to a 24-hour strike of the pilots. As reported by the president of the country’s largest air carrier, the strike “will affect 30,000 passengers”.

“Unfortunately, Aerolineas Argentinas pilots decided to order strike that none of the pilots could fly during the next day, as a result, we were forced to cancel 45 flights today, so that the planes could return to their bases”, says the official statement of the airline.

This is the first strike since 1986, because of which the company was forced to cancel all its international flights.

“Some passengers will wait a week for the moment when it will be possible to return them to Argentina”, said the CEO of Aerolineas Argentinas, Mario Dell’Acqua. “In addition to the millions of dollars that we will lose in the coming days, because we will have to pay our competitors for sending passengers that we can not transport, and customers who ask to return money for tickets, the most important – we will undermine the trust”, added he.

The Aerolineas Argentinas pilots union demands from the company management to increase their salaries. According to the president of the company, currently pilots receive an average of 250,000 pesos (14,000 USD) per month. As Mario Dell’Acqua noted, last year the salaries of the air carrier’s employees increased by 42% (inflation by the end of 2016 was about 40%).