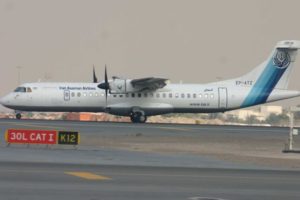 Aircraft ATR-72 of Iranian Aseman Airlines crashed in mountainous area near the town of Semirom, killing 65 people on board. The airplane was performing flight from Tehran to the city of Yasuj with 59 passengers and 6 crew, but disappeared in Zagros Mountains area in southwestern Iran. The local authorities initiated immediate investigation, but later was understood that aircraft crashed and the accident was witnessed by local residents. All the people on board died in the accident.

“After searching the area where the plane was crashed, we were informed that all people on board had died”, said the Aseman Airlines spokesman, Mohammad Taghi Tabatabai, adding that one child was among the victims. “Given the special circumstances of the region, we still have no access to the spot of the crash and therefore we cannot accurately and definitely confirm the death of all passengers of this plane”, added he.

Iran Aseman Airlines has dismissed the possibility of technical failure, pinning the blame solely on bad weather. However, local news media reported that the ATR-72 aircraft had technical problems in the past few weeks. According to preliminary information the aircraft appeared to have been attempting an emergency landing.

The ATR-72 is a twin-engine turboprop, short-haul regional airliner developed and produced in France and Italy by aircraft manufacturer ATR (Aerei da Trasporto Regionale or Avions de transport régional), a joint venture formed by French aerospace company Aerospatiale (now Airbus) and Italian aviation conglomerate Aeritalia (now Leonardo S.p.A.). The number “72” in its name is derived from the aircraft’s standard seating configuration in a passenger-carrying configuration, which could seat 72-78 passengers in a single-class arrangement.